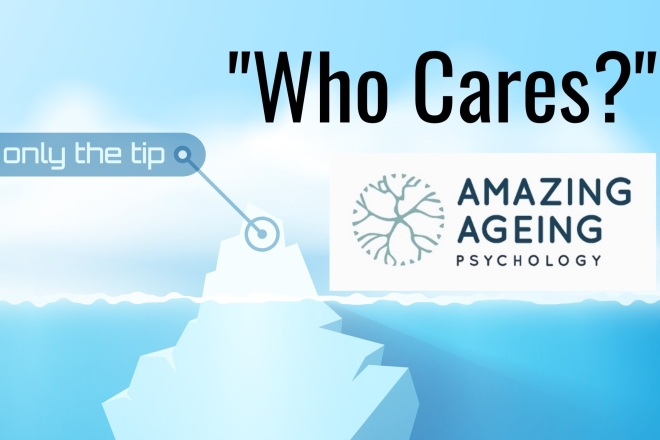 In Part 1 of this blog, I introduced the tip of the iceberg metaphor in relation to the care staff behaviour we observed in the Four Corners programme “Who Cares”, as just the small piece of the problem that is visible. Here, in Part 2, I want to explore one of the underlying  issues in the delivery of aged care services that is not apparent at first glance. Specifically, I will explore the clinical context in residential aged care settings.

There are a growing number of older Australians with dementia and other mental health problems who are living in residential care facilities. It is not surprising that challenging behaviours are prevalent in these populations. Challenging behaviours also occur in the context of people living in socially isolative environments i.e. Where people are not having their needs for social connectedness met.

Residents frequently do not identify with the other residents in the same facility, and they sometimes say “I’m not like the others here you know…”. Residents can become isolated and disempowered by lack of human interaction, care and attention; and they are often fearful to complain in case it affects their care and/or placement. Carers frequently do not have time to stop and interact with residents, other than performing their routine care tasks under time pressure. Families visit when they can, but not as frequently as many residents would like.

According to 2008 research, 40% of high care residents, and 15% of low care residents were depressed (Snowdon & Fleming, 2008). There is no reason to think those numbers would have changed. There are often assumptions made about why an older person living in residential care is depressed, such as “I’d be depressed too if I was him/her”, and “what can you expect in old age”. These assumptions are unhelpful and ageist, and prevent the person from receiving a more thorough evaluation and appropriate treatment. Studies have determined that depression is often under detected and under treated in residential care facilities (Gruber-Buldini et al, 2005; Davison et al, 2007).

There is a strong relationship between depression and challenging behaviours amongst people with Dementia. In a sample of nursing home residents referred to a Behaviour Assessment and Intervention Service (BAsIS) in 2009 for challenging behaviours (where 80% were cognitively impaired) 67% were depressed (Turner & Snowdon, 2009). This study found 39% of the sample presented with physical aggression, 23% with verbal aggression and 19% with disruptive vocalisation. Other behaviours included repetitive questioning, crawling on the floor, severe sleep disturbance, over-eating, pacing, spitting, inappropriate urinating and defaecating, and throwing colostomy bags. Many challenging behaviours remain unreported in residential aged care facilities, including resident to resident aggressive incidents (Abusson, 2018).

Research has established that depression in people with dementia can have a very different presentation such as the onset of aggressive behaviour, agitation, wandering, crying out or shouting, angry outbursts, apathy, insomnia, swearing, picking, refusal of food and or medication. All residents with such behaviours should have a comprehensive assessment to identify any underlying depressive disorder.

Depression in dementia has been reported to increase disability in the elderly. Further research has established that it is associated with lower levels of functioning, care-giver burden, increased health resource use among nursing home patients, and increased mortality. In one study, the presence of major depression was associated with a greater than 59% mortality rate during the year following admission to a nursing home (Rovner et al, 1991).

Untreated depression can also lead to suicide. Older adults have one of the highest age-specific suicide rates in Australia (12.9 per 100,000). Suicide in nursing homes has a much lower prevalence rate (6.3 per 100,000). Recent research found that 66% of those that died from suicide in nursing homes had depression; 69% were men; and 50% had resided in the nursing home for less than 12 months. The top three major life stressors identified in the suicide cases were: – health deterioration (79%), isolation and loneliness (43%), and admission to nursing home (30%) (Murphy et al, 2018).

In the Four Corner programme “Who Cares”- Part 1 we met Catherine Logan who was admitted to an aged care facility with vision and hearing impairment. Within 3 weeks of admission, Catherine’s granddaughter Dana described her grandmother as “not the same person she had been”. Dana filmed Catherine’s life in the nursing home, and her “bleak existence with lack of attention from staff”. Within the first couple of months, Catherine had lost “lots of weight”. Dana described Catherine becoming “anxious and depressed”. Similarly, Bill, who was introduced in Part 1 of my blog, was also found to be depressed. When assessed by a BAsIS clinician, Bill was worried, and he acknowledged being unhappy, bored and lonely. He said at times he was scared of the “women who do this, that and the other to me.” Bill also described flashbacks to traumatic war-time memories (he had been a Wellington bomber pilot in the Royal Air Force). Bill also had significant cognitive impairment.

This is the everyday reality in residential care facilities. It is within this clinical context that staff provide care. This care mostly focuses on physical needs of the residents. However, people also have social, emotional, and environmental needs that are almost entirely neglected.

Part 3 of my Blog will take a closer look at the aged care workforce capacity, including their numbers; and their training and qualifications for providing care for people with such complex clinical presentations as described above.

Rovner, B. W., & Katz, I. R. (1993). Psychiatric disorders in the nursing home: a selective review of studies related to clinical care. International Journal of Geriatric Psychiatry 8: 75-87.

In a wheelchair? Or walking with mobility aids? Park on Level 3 of the Gordon Centre Carpark, and take the lift up to level 2. There are also wheelchair accessible bathrooms available.